In a recent article published in the journal Additive manufacturingresearchers discussed the complex ink flow mechanisms of micro-direct ink writing and how they affect flow control. 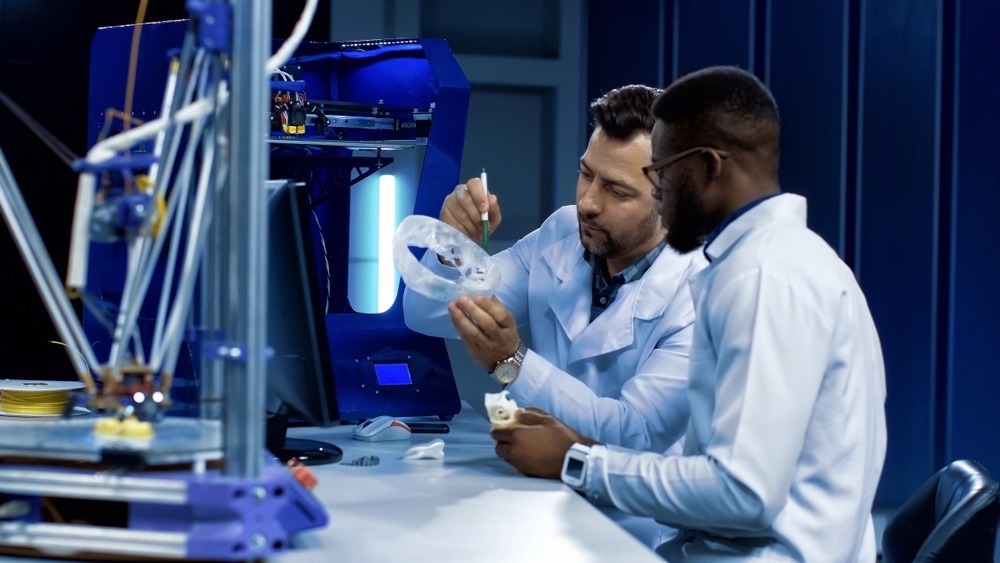 Direct ink writing (DIW) is an additive manufacturing technique known for its ease of use, versatility and affordability. Due to these qualities, it has become a fundamental technique for advanced technologies like bio-printing and printed electronics. However, DIW suffers from relatively low print resolution due to its poor dimensional accuracy.

While some of these issues have been shown to worsen as size scales decrease, others are size dependent and require further study. Existing state-of-the-art printhead implementations frequently used for DIW, in addition to having troublesome ink behavior, are not robust enough to handle the level of volume flow uncontrollability associated with the extrusion of these inks.

A thorough understanding of ink rheology and capillary flow mechanisms is required to calculate the correct inlet pressure associated with the desired volume flow. Recently, various initiatives have been taken to develop closed-loop volume flow control techniques based on these traditional printing schemes. Fundamental knowledge of how these complex inks react during micro-extrusion is lacking.

The absence of this knowledge has revealed the untapped potential of more sophisticated printing systems as well as the special conditions that must be met for them to be able to handle the difficulties of direct-to-ink writing of complex inks. on a microscopic scale. Before a viable printing system can be created, ink rheology and the mechanics of capillary flow must be better understood.

In this study, the authors discussed printing solutions to improve flow accuracy in direct ink writing at the microscopic scale to alleviate this constraint by elucidating the complex mechanics of ink flow that makes it difficult to control the flow. Pressure-flow relationships for a water-based sodium carboxymethylcellulose (NaCMC) ink solution were obtained as a function of printing nozzle diameter in the range of 510–100 μm using a DIW system that used hybrid pressure and speed controlled extrusion. These tests showed that the transient response of piston speed controlled extrusion slowed significantly with reduction in nozzle diameter.

The team deduced that for pressure-controlled extrusion, wall slip increased as nozzle size decreased, and that below a certain diameter, the constant slip velocity assumption does not hold. was no longer valid. Temperature-controlled parallel plate rheometry was applied to inks to contextualize the impact of such behavior on flow accuracy, and rheological ink models were created accordingly.

It was shown that, especially for smaller nozzle sizes, accompanying flow calculations were inaccurate because the consideration of wall slip was not taken into account. To solve the precision problems of micro-DIWs, an iterative pressure-controlled DIW solution was studied.

The researchers showed that the proposed strategy significantly outperformed both the traditional pressure control approach and the velocity control approach for nozzle diameters as small as 100 μm in terms of transient response and flow accuracy. The size-dependent behavior of non-Newtonian ink during micro-extrusion, which limited most advanced printing techniques, was explained. The construction of a closed-loop method to achieve flow control that could handle the problems associated with micro-DIW processes was explored as a final preliminary effort guided by the results.

The final shear stress for nozzles 32 and 21ga in the iterative pressure control experiments was 1228 and 1365 Pa, respectively. Around the target flow, the inflow fluctuated about ±1E-12m3/s. To manually calculate the average value, the inlet flow was observed for 20-60 seconds for the 21ga nozzle and 100-200 seconds for the 32ga nozzle. The pressure increased 10-70% towards the projected steady state pressure at a constant piston speed of 0.0005 mm/s on all nozzle sizes in 4 minutes. When all nozzle sizes had an exit velocity of 0.5 mm/s, the largest nozzle had the greatest pressure increase.

Smaller nozzles increased the complexity of the DIW and made it more difficult to manage ink flow. The smaller nozzles demonstrated a noticeably slower transient response, especially for the speed-controlled technique where the flow rate was directly regulated. When small nozzles were included in the pressure control technique, where flow was controlled indirectly by pressure, flow-pressure correlations were much more difficult to anticipate.

Additionally, due to complex ink production processes and compressibility dynamics, the transient behavior of ink flow in any method was significantly more complex for small nozzles. These results demonstrated the importance of the size scale in DIW processes and showed that towards the lower ends of the

The results showed that the suggested method improved transient performance and accuracy for smaller nozzles at all angles. This gain was achieved with a minimal pressure controller or an optimization of the iteration algorithm. This showed that the basic strategy of including both pressure input and flow in a closed-loop method was successful in achieving high-accuracy flow during micro-DIW. The overall composition and characteristics of this ink were typical of polymer bio-inks, which were frequently used in DIW applications. Many additional functional inks had more complex rheological characteristics and used micro- and nanoscale solid fillers. As a result, when various inks were involved, one would expect much more complicated size-dependent behavior.

In conclusion, this study presented an in-depth analysis of yield pseudoplastic ink flow during the DIW process with different nozzle sizes. Important elements including wall slip during ink extrusion, temperature-dependent ink rheology, and ink compressibility were taken into account. A unique DIW printhead implementation allowing simultaneous monitoring of ink flow and pressure was introduced. The final printed dimensions and their accuracy were influenced by the evolution of the shape of the deposited ink filament under the impact of ink rheology, ink-surface, ink-nozzle interactions and drying effects or thermal shrinkage.

The authors pointed out that although throughput accuracy is fundamental to the total accuracy of the DIW process, it is not the only element that affects it. They mentioned that more sophisticated controller designs could further improve transient response, allowing throughput to stabilize between iterations more quickly.

More information on AZoM: How far can semiconductor manufacturing be automated?

Disclaimer: The views expressed here are those of the author expressed privately and do not necessarily represent the views of AZoM.com Limited T/A AZoNetwork, the owner and operator of this website. This disclaimer forms part of the terms of use of this website.