Written in partnership with Gulbranson’s colleagues at the University of Kansas, Park University and the Università di Siena in Italy, the article titled “Paleoclimate-induced stress on polar forest ecosystems before the Permian-Triassic mass extinction“- explains how the research team used data from fossilized Antarctic trees to learn more about the Permian mass extinction that wiped out between 70-95% of the world’s land and sea species more than The team’s groundbreaking techniques support the conclusion that rather than a singular extinction event, the Permian extinction may in fact have been a series of events that led to mass death of plant and animal life over millions of years and have included climate change as the root cause.

“Our results come directly from the organisms that disappeared,” Gulbranson said. “Our work supports other studies that suggest a chain of events that led to the Permian extinction, but our project makes a more explicit link to climate change than existing studies that indirectly make the link by examining data on sediments.”

Or, as the research team puts it, “…the results suggest that late Permian paleoclimatic change placed significant stress on high latitude forests, consistent with the hypothesis that the change climate was probably the main driver of the extinction of glossopterid ecosystems”.

Last fall, the results of Gulbranson’s earlier field work in Antarctica were included in a New York Times Photo documentary on the secrets revealed by the melting of the polar ice. He regularly collaborates with other leading geological researchers around the world to measure the impact of ancient climate change on flora and fauna, with particular emphasis on the life and death of trees. For Gulbranson, the ability to include undergraduate students in major projects like this is one of the main reasons he works at Gustavus.

“Morgan and Aiden took part in measuring the ring widths of fossilized trees, then applied the scientific technique of cross-dating to see when the trees grew at the same time. Their contributions helped produce the key data we needed to draw conclusions about this extinction interval,” Gulbranson said. “We spent the January 2021 quarter working together to create an outline and draft sections of the paper, and their participation has continued to help us publish and share this research with a wide audience.” 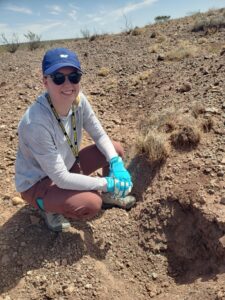 For Mellum, a rising senior from Edina, Minnesota who studies geology, environmental studies and French, the paper is the most tangible result of the research project she has worked on for most of her undergraduate career. cycle.

“I applied for the First-Year Research Experience (FYRE) summer program during my freshman year at Gustavus. I was paired with Dr. Gulbranson for the summer research and we immediately began working on the material that ultimately resulted in the Scientific Research article,” Mellum said.

“It’s amazing. It’s something I didn’t expect to be so big,” she continued. “We went to present some of this work at the Geological Society of America conference and they got a lot of attention, and Erik was immediately approached by other leading scientists who considered it high-impact research.

Mellum is also involved on campus as a member of the geology club, student worker in the geology department, and NCAA Division III student-athlete on the Gustavus swim and dive team. Last summer she completed a Fulbright-funded research collaboration with Canadian researchers in which she created a three-dimensional virtual model of an insect that had been preserved in 100 million year old amber. After graduating from Gustavus next spring, she plans to pursue a doctorate in geology with a focus on ancient soils and ancient climates.

But first, there’s more research to do.

This summer, Gulbranson and Mellum will travel to Big Bend National Park in Texas, where they will explore the fossil record that will shed additional light on the Cretaceous mass extinction event best known for ending the era. dinosaurs and inaugurated the beginning of the modern Cenozoic. era – which took place about 66 million years ago.

“Big Bend is one of the best-preserved areas of land that is near where the asteroid hit that triggered this extinction event,” Gulbranson explained. “We’re collecting data that may ultimately allow us to see if we can find differences in the timing of extinction between terrestrial and aquatic populations.”

For Mellum, the trip – and the lab research, analysis and writing that will follow – will be another opportunity to reflect on her continued growth as a researcher uniquely well-rounded due to her liberal arts background.

“I have a lot more confidence in myself and my overall knowledge of what I’m working on and how it connects to the bigger picture than I was as a freshman,” Mellum said. “Dr. Gulbranson is an excellent teacher. He took a group of students with no direct experience in ancient climates and brought us up to speed by making the science accessible and then leaving us to run.

“My role as a professor, in addition to teaching, allows me to involve students in this original research. Morgana is a great example. She did everything from fieldwork and lab research to analyzing, writing, and ultimately publishing as an undergraduate,” Gulbranson said. “In addition to contributing to ongoing scientific research that helps us better understand our world, these collaborations with students are why I do the work I do.”