Santa Claus is coming to town and this year he’s bringing ephemeral bars with him for the holidays. Two St. Louis bars announced the pending vacation theme, and the drink menus are freebies that continue to deliver.

There will be no reindeer break at three sixty (1 S Broadway, 314-241-8439) but a lot of alcohol will run off the roof. Now open, the pop-up experience turns Three Sixty into a snow globe, overlooking Busch Stadium and offering its famous view of the Arch. Before 10 p.m. there is no cover charge. Guests can enjoy their drinks inside or outside, and if you’re trying to savor your spiked hot chocolate (yes, that’s an option!) Food is also available at the bar.

Three Sixty’s holiday cocktails include the previously mentioned spiked hot chocolate – aptly named “Hot for Santa” – which is made with vanilla vodka, hot chocolate, peppermint and marshmallows. Depending on where you are on Santa’s list, you can sip the “Nice Elf” or the “Naughty Elf”. The latter includes Montelobos mezcal, ginger, and cranberry, while the former is made with ginger, cranberry, ginger beer, and 1220 vodka.

“Baby It’s Cold Out-Cider” is aimed at lovers of enriched cider; allspice, trace buffalo, sweet vermouth, ginger ale, and cider are all in the drink. Shots are also available if you’re looking for one: the “Son of A Nutcracker” is made with Amaretto, Heavy Cream, Frangelico, and Cinnamon, while the “Down the Chimney” might help if you plan to deliver. gifts all night long with its concoction of Redbull Blueberry, Lemon and Smirnoff Blueberry. 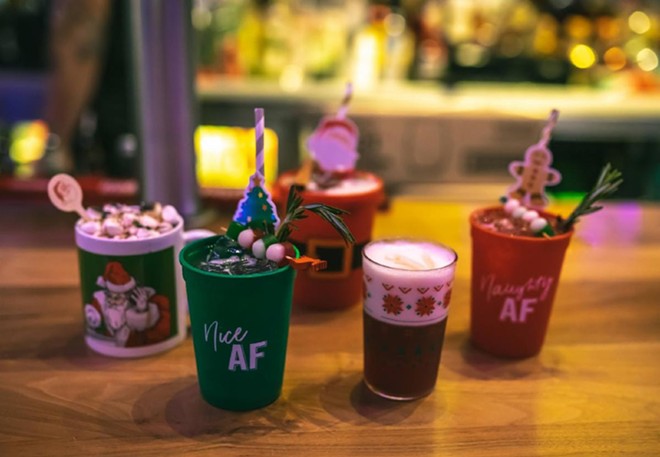 From December 9, the Central West End Cocktail Bar Lazy tiger (210 N Avenue Euclid, 314-925-8888) has its Filthy Animal pop-up bar back for the holiday season. Gift-wrapped mugs, creative cocktails and a “curated holiday hip-hop playlist” are all on the table, according to a press release, along with gift sets of Filthy Animal holiday cocktails for loved ones. Filthy Animal products – personalized mugs, mugs, hats and sweatshirts – can also be purchased.

“We started Filthy Animal as a home cocktail experience last year due to the pandemic, so this is our first in-person vacation pop-up,” said Tim Wiggins, co-owner and director of beverages at Lazy. Tiger, in a newspaper. Release. “I am happy that we are able to bring the whole experience to St. Louis this year for a great cause.”

The bar will donate $ 1 for each cocktail sold and $ 5 for each gift box sold to St. Louis Family Gift Drive, a non-profit organization created by Wiggins’ mother. The organization provides gift cards, gifts and resources to families with children with developmental delays in St. Louis.

The pop-up bar focuses on “the nostalgia, fun and joy of the holidays,” according to Wiggins. He adds in the press release that he wants people to “smell and taste this childish dizziness of the holidays.” Drinks include the bar namesake “Ya Filthy Animal”, made with mezcal, Midori, grapefruit soda, sherry fino, Becherovka, lime and tajin, as well as spiced cider, milk. chicken and more.