Printing a sefer over the past centuries, it has taken extraordinary effort and commitment; the stories behind the printing of many of these books tell tales of immense self-sacrifice. Two volumes that I discovered recently both contained in their introductions the context of their going to press. 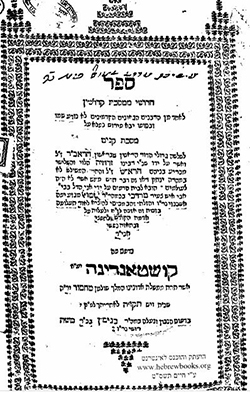 In 1751, in Constantinople (now Istanbul), a treaty commentary kiddushin by an unknown author from the time of the Rishonim has been printed. The volume was based on a manuscript brought from Egypt by R. Mordechai Yafeh Ashkenazi, and funding for printing was provided by R. Naftali ben Moshe Ashkenazi. This R. Naftali was a Polish Jew who made aliyah with his elderly father in Eretz Yisrael, where they settled in Safed. His family, however, was left behind in Poland awaiting an opportunity to join him. After the death of his father, R. Naftali made the arduous journey back to Poland to reunite with his family and bring them back with him to Eretz Yisrael.

He writes about his struggles in his introduction to this publication: “I will talk about some of the great graces that G‑d has given me. I traveled to the holy city of Safed, in the upper Galilee, with the Chief Rabbi, my father, and left my Gd-given children in Poland. Time had passed and my master my father had passed away. This forced me to leave my home in the holy city to return to my homeland to bring back my children; perhaps they deserve to study Torah in Eretz Yisrael. Upon my return by sea, Gd created tremendous storms in the seas, and had it not been for my ancestors’ merit and my role as an agent for a Mitzvah matter, I would have succumbed to the waters of the deep. Gd in His mercy saved me and I arrived on dry land, albeit without any of our belongings, just our naked bodies. We arrived in Constantinople and I thought to myself, how can I thank God for all the grace he has given me. I barely finished thinking and who stands before me other than R. Mordechai Shmuel Yafeh, and in his hand is this manuscript ready to be printed, but alas there was no money. I sold what little I had left in my name to support this business…”

Another book published thanks to a miracle at sea is of a different nature and merges with the tragic fate of many books of this era of printing. In the early 1600s, R. Chaim Hakohen, a native of Safed and later Aleppo, was a famous kabbalist and disciple of R. Haim Vital. In the 1650s until his death in 1655 he published six of his works in Amsterdam, Venice and Livorno. In all of the Middle East, North Africa, and the Near East, no Hebrew printing press existed at this time, its only printing option being in Europe. R. Chaim Hakohen sent one of his works to Europe to be printed, but years passed and all trace of his manuscript was lost. The Malta pirates were a major danger at sea at this time. Maltese knights lived like pirates operating slave galleys. Calling themselves “Armies of Religion on the Sea”, they attacked Muslim commerce and slaughtered Muslims under the banners of the Virgin Mary and John the Baptist, and the famous red cross of their Order. The situation was serious enough that in Venice the Jewish community had a dedicated fund of “Pidyon Shevuyimto redeem the Jews captured by these pirates.

In his introduction to Torat Chacham, printed in Venice in 1654, the author writes “I said to myself that I would print my books for my profit and that of others. I sent my comment on Esther first, since it is brief…. Since I sent it, many years have passed and no progress has been made. Sick with worry, I told myself that I would print the books I wrote myself. I left Aleppo and traveled by sea. We were at sea and entered a port, where we were stranded for five days due to the lack of wind. On the sixth day, pirates from Malta quickly seized our ship; when i saw that all hope was lost, i jumped into the sea, miraculously survived and reached the shore. After many hardships, I arrived in an inhabited region, but alas my manuscripts were lost. I said to myself that I will try to rewrite them from scratch, even if my mind is no longer with me and I cannot concentrate, maybe Gd will see my sorrow and help me as he has done it in the past…”.